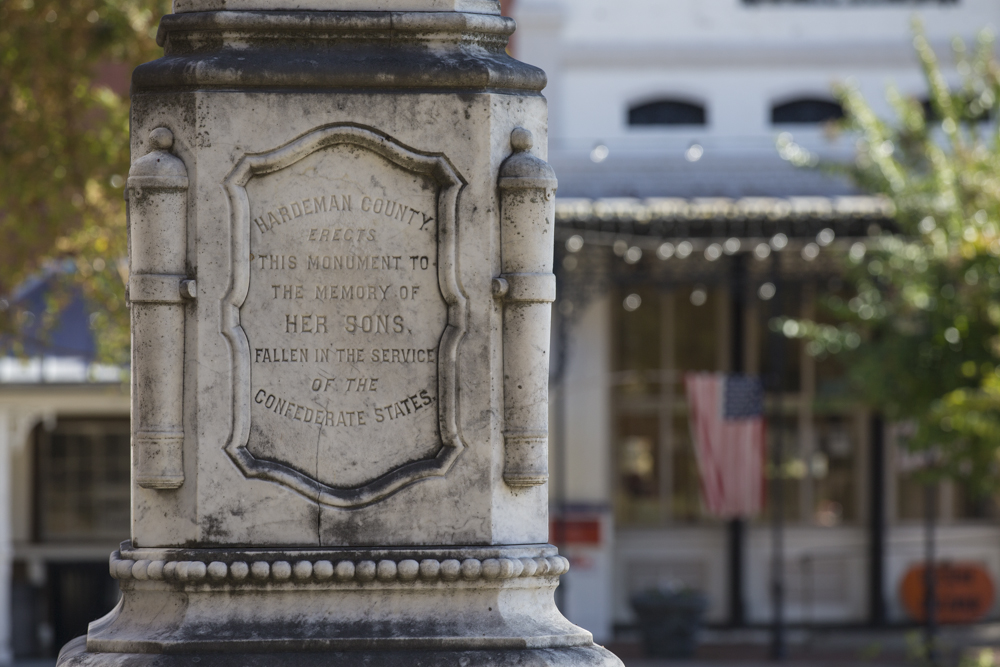 Although Hickory Valley dates its beginnings as a town from 1856, it actually rivals Bolivar as one of the oldest towns in Hardeman County. Its origin dates back to the merging of three independent pioneer settlements in the area that were founded by William Shinault before 1820, Drury Wood in 1826 and William Barnett in 1827.

Two churches, the Hickory Valley Methodist Church and Hickory Valley Baptist Church remain active and continue a more than 30-year tradition of holding joint Easter Services each spring. The Hickory Valley Woman’s Club meets on a regular basis and has been instrumental in completion of a number of revitalization and beautification projects in town.

Several antebellum homes, an old brick building and an operating cotton gin are all that is left of the once-thriving business district that abutted the railroad tracks running through town. A steam-operated sassafrass mill, the only one of its kind in the United States, sits in front of City Hall on Highway 18. The mill was built by owner/operators H.H. McMurtree and Luke Wadley in the 1920’s and was later operated by J.T. Fawcett. Sassafrass oil manufactured in Hickory Valley was once widely distributed across the country.

The Shinault settlement, made before Hardeman was organized as a county, included lands that encompass the present town area. It included the first school in Hardeman County, which was known to be operating in 1823. The main structures were one mile southwest of the present town, on an old Indian trail that connected Van Buren to the east, with the Bolivar-LaGrange Road to the west. This old roadbed is still visible in places south of Hickory Valley, where it crosses Highway 18 near the TVA substation.

In 1826, Drury Wood migrated to Hardeman County and founded a settlement known as Hickory Valley. A family cemetery located on the southwest corner of the Joe Martin farm today marks the original site. William Barnett established the Mt. Comfort Church and campground in 1827, approximately two miles west of the current town.

These early pioneers entered a wilderness filled with hostile, displaced Chickasaw Indians, whom history has deemed among the best and fiercest warriors in all of the Indian nations. All three settlements were within walking distance of each other and frequently banded together for protection.

With the advent of the railroad in the 1850’s, the settlers moved their homes and businesses to the present site of Hickory Valley to be near the tracks and depot. The railroad levee that runs through Hickory Valley and is still evident today is believed to have been built by the slaves of plantation owner Darius Robinson.

Hickory Valley was devastated by the Civil War, as the railroad, the lifeline of the town, fell under the control of the Union Army after it was abandoned by the Confederacy. Several major skirmishes were fought in the area, including a major battle just north in the community of Middleburg. It is said that local residents killed two Union soldiers sent by General Grant to guard a railroad bridge on Hammons Hill above the town.

In 1873, Thomas Cargill laid out the city streets and merchants began moving back into town. The town continued to prosper until the yellow fever epidemic of 1878. The Bolivar Bulletin reported that the town was deserted of its inhabitants “fleeing from the scourge.” In 1882, Hickory Valley was quarantined because of an outbreak of smallpox.

Legendary railroader Casey Jones frequently passed through the town. Will Hammons, a resident who rode the trains with Jones, told descendants the story of Casey Jones stopping on Hammons Hill to cut a large cane that he used as he passed through town to beat the sides of his engine as if it were a horse. When Hickory Valley merchants complained his antics were scaring their horses, Jones tied a rope to the front of his engine and used it to slowly lead his train through town.